Owing to Moen’s undeniable brand prevalence and general recognition in the kitchen and bathroom fixtures industry, our need to introduce you to the giant becomes redundant. Of all products in their diverse catalogue, the company is profoundly cheered for their modern, functional and innovative kitchen faucets. Moen kitchen faucets may come in at a comparably higher price point, but they sure do compensate for themselves in the long run.

Once you’re set on the brand, you’d discover that Moen has virtually countless faucet models on display for you to select from. Finding the best Moen kitchen faucets for your specific needs and predetermined budget may get a bit tricky if you’re flicking through the options on your own. To help you narrow down your options, we’ve sorted the absolute best Moen kitchen faucets in separate budget segments for this collection of Moen faucet reviews. Make sure to decide on the type of kitchen faucet you’re looking for. Our write-up on the different types of kitchen faucets might help you get informed about the recent faucet styles. 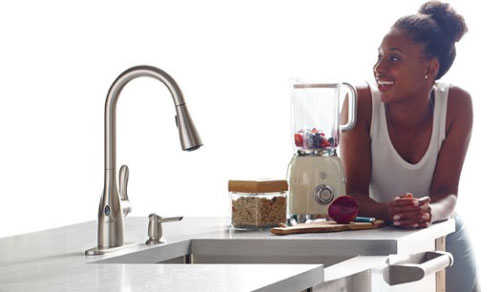 Aesthetic appearance, ergonomic built, contemporary features and flawless performance, the Moen Arbor MotionSense should be the top-pick for anyone that values effortless functionality alongside striking elegance. The faucet combines beautiful finishes with convenient operation – an ideal composition for high-end home kitchen decors and restaurant businesses. Adding to the functional design, the retractable pull-down faucet has its signature benefits. 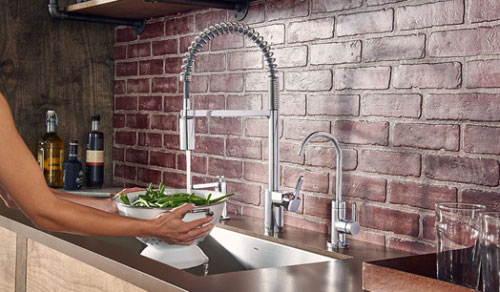 Elegant yet subtle, this high-arc pulldown kitchen faucet from Moen has a rather minimalistic design to begin with. With four standard finishes, the faucet can very well match most kitchen schemes and easily be the centre of attraction in your kitchen. Adding to the versatility, the faucet can be bought with or without the sensor. Both alternatives keep their modest design with a convenient single lever. This particular model can also be used in commercial kitchens because of its huge footprint & features. We have also made a list of best commercial faucets which can be used in commercial as well home kitchen. 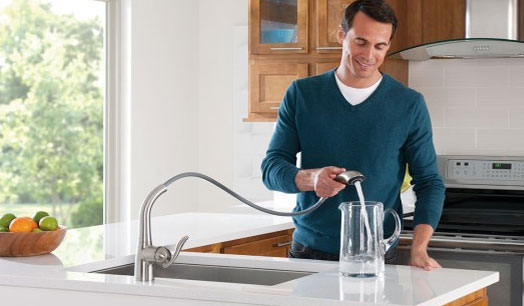 If you desire the traditional short-spout pullout faucet for your kitchen for any reason, know that these have their own less discussed benefits. With the generic advantages of a pullout faucet including better sideways manoeuvrability, immunity to water splashing and fitting better under deep cabinets; the faucet gives you extra features to watch out for. 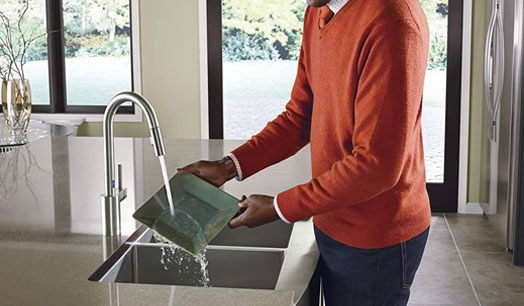 The Moen 7565ESRS Align Motion Sense Pull-Down Kitchen Faucet fits in any modern kitchen. The combination of an architecturally flowing spout and the reinforced flat-topped base provide both visual continuity and structurally soundness. Touchless operation brings a whole different dimension of kitchen convenience with the package. It also has a Duralock Quick Connect system, which is a proprietary feature that makes installation a snap. 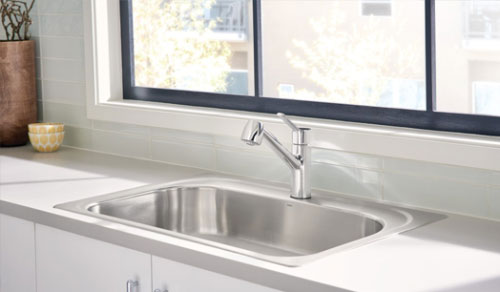 For all the thrifty homeowners that seek the reliability of a Moen but want to keep their spending at the minimum, this Moen faucet with a pullout configuration might just be what you’ve set out to find. Ideal to fit under deep over-the-sink cabinets, the faucet with its relatively smaller stature still manages to capture the eye. With multiple finishes to choose from and all options being easily cleaned, your Moen kitchen faucet will sit pretty for years to come.

On a typical Seattle night in 1937, a youthful Al Moen was tidying up after a night of work when he went to wash his hands at a good old two-handle faucet. An unexpected explosion of heated water made him bounce back in caution and this snapshot of shock ended up being the motivation for the invention of single-handle faucet that would revolutionize the plumbing industry. In 1947, manufacturing of the single-handle faucets finally began and the first 12 of them were sold for $12 each. In 1950, Moen gained national recognition by supplying the faucets for Hotpoint’s first pre-fabricated kitchens.

Alfred Moen himself held exactly 75 invention patents and was nominated for the National Inventors Hall of Fame. He was likewise named to the Kitchen and Bath Industry Hall of Fame in 1993. In 1997, Moen introduced the LifeShine non-tarnish finish and became the first manufacturer to offer polished brass products featured with a lifetime finish. The creative innovations continued to enhance people’s lives for around 75 years.

Moen is cherished by an enormous portion of the US populace, for the product’s quality. Additionally, the company and its journey to the high status of today speaks to a piece of a greater picture, of the American unique thoughts, of the American dream. Moen is known for its luxury kitchen faucet designs which fit with any interior theme. If you’re into luxury faucets, you can check our list of the most luxurious kitchen faucets in the market.

1. Designs to fit all decors

Moen has introduced a vast array of endless styles that can offer any kitchen space or any room a sleek and advanced aesthetic. The domain incorporates Modern, Transitional and Traditional categories. The sleek and cool designs included in the modern domain offer the kitchen space an uncluttered feel while creating a fun and revived environment all around. The transitional array includes designs that offer quite natural and appealing feel while sustaining the comfort and warmth of a trusted classic. On the other hand, the traditional faucets are integrated with every rich detail that soothes the eyes as well as the soul.

Touchless kitchen faucets are integrated with the MotionSense technology that features a touchless activation. It allows you to easily turn the water on and off with the wave of a hand. There are primarily two types of sensors that are being adapted by Moen’s products: wave sensors and ready sensors.

The wave sensor detects your hand movement to activate the water flow. You simply wave past the sensor to activate the stream and after washing your hands completely, just wave back one more time to deactivate it. On the contrary, the ready sensor identifies the presence of any object in front of it and gets activated. It gets deactivated once that object is pulled away from it. Both sensors make everyday tasks quite convenient for you.

Moen’s Reflex faucet system is one of the principal high arc pull down faucets that work with you and not against you. The Reflex faucet system offers the greatest scope of movement and gives self-docking innovation that makes it a snap to re-dock after each utilization. Moen really investigated the most usually utilized edges and structured the faucet to move with you and angle itself effectively with your hand. The system responds to you easy, the wand is ergonomic and contains a swivel joint that permits you to reach all edges of your sink and past. The hose is adaptable and will retract all alone permitting you to utilize one hand to work the unit without battling.

Probably the best feature integrated into Moen’s Reflex systems is the re-docking ability. After frequent uses, many pull-down faucets no longer queue up when you return them or just start to dangle from the spout, not Moen’s Reflex faucets. Planned with the ideal weighted hose and faucet head, these pieces self retract and realign themselves to return to the dock each time easily.

Sticky butter and cheese-based stains are commonly found on the utensils and are really hard to clean. A normal water flow with a moderate force is simply not enough for them. Therefore, Moen invented Power clean technology that offers a powerful and concentrated spray for a quick clean up. It is a more productive way of cleaning as it results in less time and water consumption. Moreover, it provides 50% more spray power compared to the other pull-down faucets available while minimizing the splash and other mess.

Another vital factor is Moen’s customer care policy. Over the past few decades of evolution, the company has successfully gained the trust of customers, thanks to the creative innovations and quality production. Such virtues can be spotted through consumer reviews on multiple forums and e-commerce websites. You can rarely detect some of the negative reviews as well, but the fact is mistakes are apt to happen unless they happen frequently, the odds remain in our favor only.

Now that we’ve been through comprehensive Moen kitchen faucet reviews of our top picks, it should be easier for you to make a wise selection. Concentrate on the above-mentioned factors during the purchase and select the one that matches your demands and inclinations. Additionally, the one that complements your home décor will be a perfect pick. Also, do an online research regarding the authentic sellers that offer extended warranty periods as this will assist you in saving money in case you get some issues in the future. 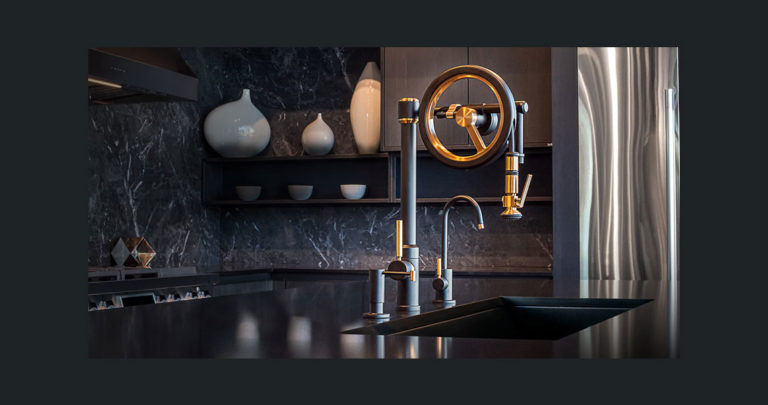 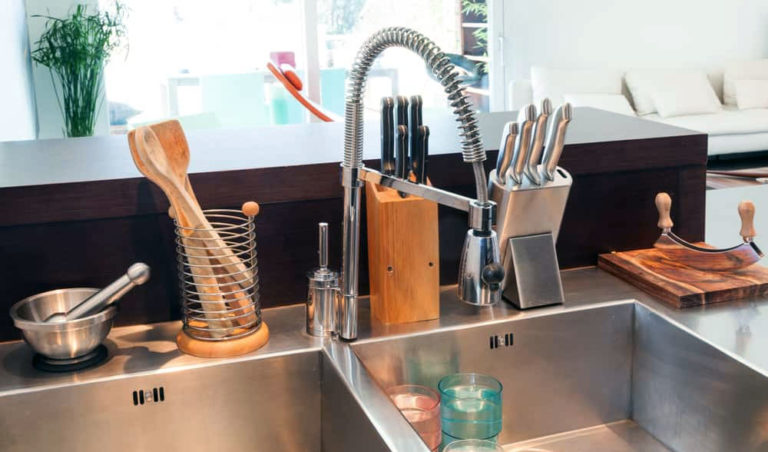 There’s just something undeniable about commercial kitchen faucets that makes homeowners rethink their decisions over. The general perception of a professional kitchen faucet being apt exclusively for a restaurant kitchen has been dissipating over the years. Minimalist design, enhanced utility and higher durability of industrial kitchen faucets make them perfect for modern household kitchens besides… 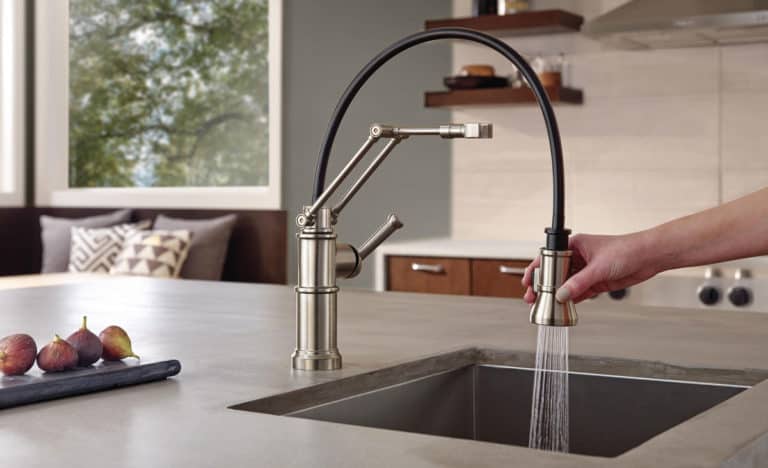 Brizo is a luxury fittings brand for the individuals who don’t limit fashion to their clothes only and understand the fact that it reflects their entire lifestyle. The brand is a subsidiary of Delta faucets and features only high-end premium faucets highlighted with distinctive designs that complement the royal décor. The Brizo 63225LF secures a…

Delta Faucet Company enjoys an elite status across the states and ranks among the very few faucet companies that require virtually no formal introduction. With innovative yet functional designs and contemporary technologies, Delta kitchen faucets arguably provide the best value for your money. Most delta faucet reviews that you’ll ever come across will most likely…